I recently returned home from the annual Society of Biblical Literature conference in San Francisco. While there I heard a very interesting paper by Andrew Knapp (Johns Hopkins University), in which he gave a new take on part of the text of the Tel Dan Inscription. This Old Aramaic inscription is perhaps best known for containing the phrase House of David (or something close to this). Knapp’s paper focused not on this phrase, but on another section of the inscription. He argued that the word קדם in line 4 of the inscription, which scholars usually translate by the adverb formerly, is actually a toponym, Qedem. He pointed to other sources in which there appears to be a place called Qedem in the northern Transjordan in the general vicinity of Damascus. Thus, according to Knapp, at least one of the reasons given for the hostility between Aram-Damascus and Israel that is reflected in the inscription was an Israelite incursion into Damascus’ territory at the town of Qedem.

As I told Knapp after he gave his paper, I welcome his new approach, as it stirs the pot a little after the discussion about the meaning and significance of the Tel Dan Inscription has congealed. However, at the same time, I believe there are some fatal flaws in Knapp’s theory because it rests on the original decipherment of the text by Biran and Naveh. I have outlined the flaws inherent in this original reading in my book, The Tel Dan Inscription: A Reappraisal and a New Interpretation (T & T Clark, 2003). However, it seems that the main piece of evidence that disqualifies the original reading still goes undiscussed and unaccepted in general scholarship. That piece of evidence is an extra letter on the inscription.

This is usually rendered:

And my father lay down with his fathers. Then the king of Israel went up
formerly into the land of my father. But Hadad made me king. 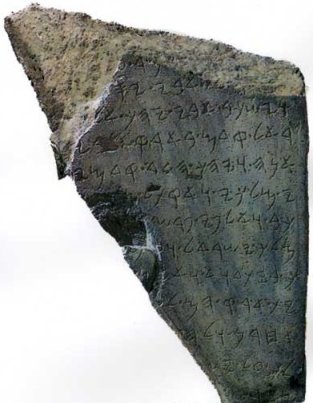 If you look at the fourth line of Fragment A (pictured above), you will notice that there is a lacuna (a pock mark) in the stone towards the left hand side. It was presumably caused by the destruction of the original inscription in antiquity. This lacuna occurs between the aleph (א) and beth (ב) of the word usually transcribed as אבי (my father), and actually covers part of the aleph and part of the beth. This causes one’s eye to draw the aleph and the beth together. The result of this visual arrangement makes one, on a casual glance, believe that the beth follows immediately after the aleph, such that the word appears to be אבי (my father).

However, this is merely illusory. There is, in fact, a significant gap between the aleph and the beth. There is, after all, a lacuna between them, and it is big enough to accommodate an intervening letter. This, of course, does not mean there must be an intervening letter, except for the fact that the remains of an intervening letter are physically there on the surface of the stone. It is not immediately discernible in the photographs of the inscription, but the evidence is there: jutting out of the top of the lacuna are two strokes, the left one of which is merely a damage scratch. This initially makes one think that the right stroke is also a damage scratch. However, it most certainly is not. The right stroke is deliberately carved, bearing all the hallmarks of every other carved stroke on the inscription. In fact, the stroke bears the characteristic features of all other lameds on the inscription (a deep stopping mark at the topmost point where the engraver’s chisel finished carving the letter). The position and slant of this stroke can be compared with the aleph and lamed that appear in line 3, almost immediately above it.

In response to my pointing out this carved stroke, Knapp said that there was no indication that there was an extra letter at this point of the inscription. I pressed Knapp to see if he had reached this conclusion on the basis of the photographs alone, or whether he had personally examined the stone itself. He replied that his conclusion was based solely on the photographs. This is exactly the same position taken by Nadav Na’aman in his review of my book. Na’aman wrote:

Equally unlikely is [Athas’] reading of line 4: b’rq.’lby[….][…], as no trace of the lamed is visible in the photographs.
(Review of Athas, The Tel Dan Inscription: A Reappraisal and a New Interpretation, in Review of Biblical Literature 10/2004)

Both Knapp, Na’aman, and so many other commentators on the inscription, however, commit a cardinal sin in evaluating and reconstructing the text: they fail to consult the stone itself. I had the opportunity to examine the stone at Jerusalem in 1998. When I arrived to inspect the inscription, I had no inkling about this extra letter. Its existence had not even occurred to me. Like all others beforehand, I had simply drawn the aleph and the beth on either side of the lacuna together as sequential letters. And yet, as I examined the stone, lo and behold, there was the extra letter! I was, in fact, quite shocked to discover it, since it had previously gone unnoticed, and the photographs gave no indication that this ‘scratch’ was an actual letter. And yet, as I examined the stroke carefully and compared it to all other carved strokes on the surface of the inscription, I could no longer deny that this was, in fact, a real letter. Try as I might to ignore or reason it away, I could not. It was very much there!

The result of this extra letter is that the original reconstruction of the text proposed by Biran and Naveh, which scholarship has largely followed as the consensus, is categorically impossible. The word in question is not אבי (my father), but אלבי. What exactly this word means is conjectural. I proposed in my book that it is the first part of the name אלביתאל (El Baytel or El Bethel)—the name of the deity El in the form of a Bethel stone or massebah. However it is translated, though, the author is certainly not referring to his father with this particular word (though he does at other points in the inscription). In Old Aramaic, the word father does not have a lamed in it!

This extra letter stands in addition to the other major flaws of the general consensus view of the inscription, such as the claim that Fragments B1 and B2 belong to the immediate left of Fragment A. This claim and the text reconstructed on the basis of this configuration is virtually physically impossible. Furthermore, the authorship  and dating of the inscription were pegged to Hazael in c.840 BC, but this was concluded before the find site at Tel Dan was fully excavated. Subsequent seasons of excavation at Tel Dan show that this is slightly too early for the relevant strata. In addition to this, it seems that the consensus view largely sidesteps the fact that Hazael was a known usurper of the Damascene throne. That is, his father was not the previous king of Damascus. In fact, the Assyrian king Shalmaneser III refers to Hazael as ‘the son of a nobody’, implying that he was not part of the previous ruling dynasty. This fact is further reflected by the biblical tradition that Hazael murdered his predecessor to take the throne (2 Kings 8.15). And yet the Tel Dan Inscription (at other points) refers to the author’s father as though they were the reigning monarch. The general consensus view of the inscription simply does not make sense. The much more likely candidate for authorship is Hazael’s son, Bar Hadad.

There are many other flaws in the general consensus view of the Tel Dan Inscription, which I won’t enumerate here. They are all discussed in my book. However, it is about time that scholarship on the inscription and those who wish to use it in understanding the history of the Ancient Near East paid attention to this extra letter in line 4 of Fragment A, for it scuttles the basic consensus. The Tel Dan Inscription needs to be examined again and examined more closely, and our history books amended accordingly.

18 thoughts on “The Extra Letter on the Tel Dan Inscription”