Many of us know the beginning of the Jonah story well: God tells Jonah to go to Nineveh and preach against it, but Jonah has other ideas. Instead of going to Nineveh in the heart of Assyria (modern day northern Iraq), Jonah gets on a ship bound for Tarshish (probably the Atlantic coast of Spain). But on his voyage to the other side of the known world, God catches up with Jonah, sending a storm that threatens to sink the ship. Jonah realises that God is chasing him and so offers himself as a placation to the stormy seas. He is thrown overboard by the frightened sailors, and just when we think Jonah is going to drown, he is swallowed up and preserved by a giant fish. Jonah’s life is saved and he is eventually spat up onto shore for ‘take two’.

Well, that’s at least how the story seems to run when you read an English Bible. According to our English translations, Jonah tries to outrun God, but God manages to chase him down. However, the Hebrew text of Jonah 1 actually suggests a slightly different storyline. And it all comes down to two particular types of verb that Hebrew uses in the narrative.

You see in Biblical Hebrew, the main job of the verbs is to get you to look at actions in particular ways, rather than simply tell you when the actions occur. It’s as though the Hebrew language drops you into the story itself to walk around and experience the action directly. And the Jonah narrative is no different.

The first verb relevant to our discussion is what we call the wayyiqtol (a.k.a. the ‘consecutive preterite’). This verb type is commonly found in narratives and helps drive a narrative forward. It lets you watch an action as though it were happening live. So every time you get a wayyiqtol verb in Hebrew, you are watching an action unfold right in front of you. Most of the verbs in Jonah 1 happen to be wayyiqtol verbs, and these help push the storyline along. And, as is custom in English, when you tell a story, you use the past tense:

As you can see, the narrative has a fairly brisk pace in v.3, as it relates Jonah’s hurried attempt to run from his divine commission.

However, in v.4, we encounter a different type of verb—what we call the qatal (a.k.a. the ‘perfect). Rather than depict an action happening live, it presents an action as a simple, established fact. When you come across a qatal verb in a narrative it usually serves to halt the narrative momentum by bringing something else to your attention. In this particular case it focuses on God’s action:

You will notice that this action indicates a past tense. Since English convention usually tells stories in the past tense, it is often difficult to distinguish the significance of this particular qatal verb from the previous wayyiqtol verbs. Most English versions translate both types of verb with a simple past tense. However, the shift in verb usage here is quite significant. The story stops and we do not watch Yahweh hurl a huge wind into the sea. Rather, the narrator tells us that this action is already an established fact. In other words, it seems that Yahweh had already performed this action beforehand. The narrative then resumes the live action with a wayyiqtol verb:

What does all this mean? It seems that the narrator wants us to understand that Yahweh is in complete control of the situation. Although Jonah is on the run, trying to avoid his divine commission, Yahweh has already taken pre-emptive action, seemingly knowing that Jonah would be on his way to Tarshish rather than Nineveh. Yahweh is, therefore, not chasing after Jonah, as though Jonah might get away from him. And the storm at sea is not Yahweh’s Plan B. Rather, Yahweh had already placed the storm at sea, knowing full well that Jonah would be heading that way instead of heading to Nineveh. God had ‘snookered’ Jonah in advance.

In addition to the type of verbs the narrator uses, it is interesting to note the order in which the narrator describes the actions. We are left to discover the fact of God’s pre-emptive storm placement at the same time Jonah does. Thus, our picture of God develops gradually throughout the book, as we learn about his supreme sovereignty as well as, later in the story, his supreme compassion on a foreign enemy. We discover things about God in a way that allows us to critique Jonah’s presumption in ch.4.

Who said it isn’t worthwhile learning Biblical Hebrew? There’s gold in them there verbs! 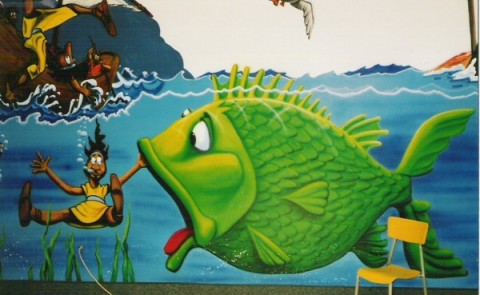